Posted by Allan Steinmetz on 8 December 2015 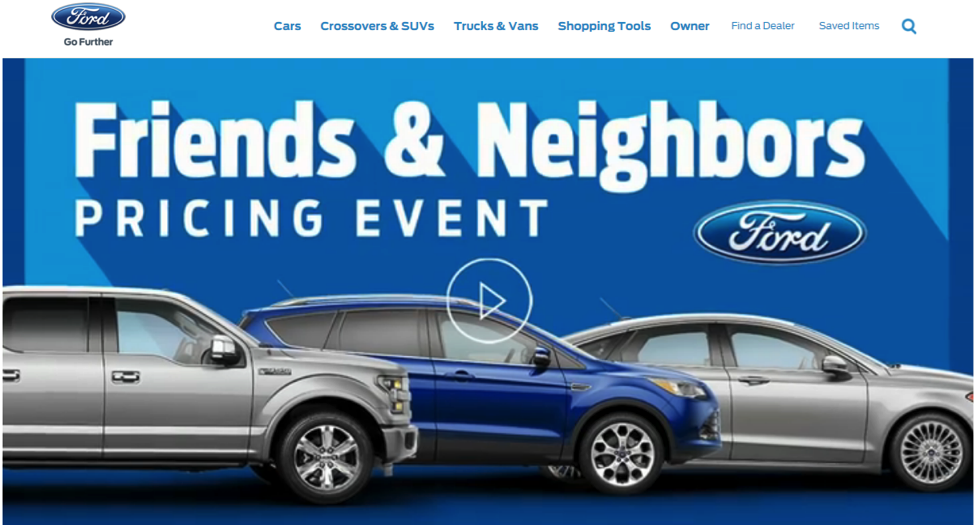 A few weeks back, the Ford Motor Company launched an incredible idea that has often been made available in traditional retail but rarely in the automotive field. They announced a friends and neighbors promotional discount that easily lays out a plan to get the friends and neighbors of Ford Motor Company employees to buy a new Ford vehicle. It began on Tuesday November 9th and runs through January 4, offers what the automaker calls "an inside deal, now for everyone." It’s simple it’s engagement and advocacy on steroids. http://ford.to/1NPTeaf

The advertisement shows individual employees with their name and title explaining how the program works while standing before a dealer or their workplace. It starts with Dibrie, a Ford employee saying, “it’s so easy to get this inside deal for friends and neighbors.” A second employee follows named Jim G standing in front of a Ford pickup truck at a dealership. He continues the narrative, “we're letting everyone in on this deal”. Then a third person pops up on screen, Shushma P, and continues, “It’s hassle free”. Then they had cuts to Shaun T sitting behind the wheel of the new Ford focus. It goes on to explain that you go online research to the car you want, get a price, print out a sheet ticket to your dealer, and pick up the car you want. Simple.

Ford has unleashed an advertising blitz featuring employees inviting their friends and neighbors to take advantage of the big deals, according to the dealer guide. The promotion includes enhanced discounts from Nov. 27, the post-Thanksgiving shopping day known as Black Friday, through the year’s “final days,” according to the guide. It also offers dealers higher commissions for participating in the program.

“Please use all the resources available to help make this the best sales event yet,” Mark LaNeve, Ford’s vice president of U.S. marketing, sales and service, wrote to dealers in the guide. “We look forward to big sales and a strong close to the year.”

In my humble opinion, using the Ford employee as a way of communicating and advocating this plan to sell incremental product is brilliant. It generates pride, being able to help friends and demonstrate that working at the Ford Motor Company has its benefits. This is especially relevant now during the holiday and end of year season. This promotion was the brainchild of Mark LaNeve who apparently tried something similar when he was at GM over a decade ago with great success. It seems he’s dusting off the old playbook. Personally, I think it’s going to work well during the time where employee engagement and participation and inspiration for successful brand is paramount.

The Ford Motor Company employees 187,000 people. Imagine if each and every one of them were able to facilitate the sale of one extra car as a result of this program. That would be huge. Kudos Ford Motor Company.