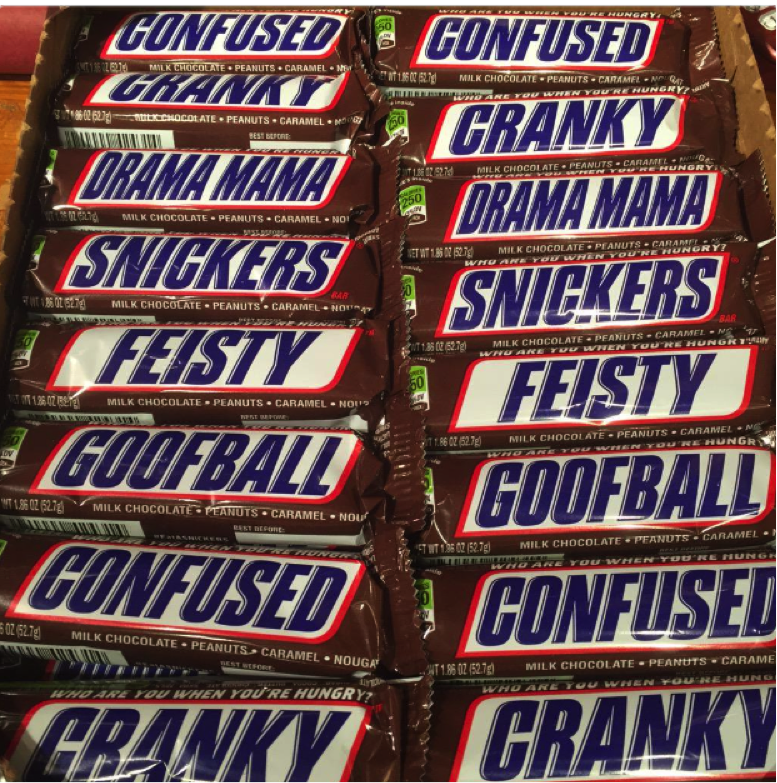 I was walking through the grocery store the other day and when I got to the checkout aisle I looked to my right to browse the candy display. I was pleasantly surprised to see a box of Snickers with their bar packaging changed to reflect the moods of people depicted in their current advertising campaign "You're not you when you're hungry". I instantly took an iPhone photo and decided to do some research and write this blog post.

This is what I learned. There are 21 customized bars. For example, you can give friends bars emblazoned with the words Cranky, Grouchy, Confused, Irritable, Impatient, Complainer, Whiny, Curmudgeon, Ornery, Testy and Snippy. Those 11 are balanced out by 10 other bars which are a bit less insulting—Rebellious, Feisty, Sleepy, Loopy, Goofball, Forgetful, Drama Mama, Dramatic, Princess, Spacey.

According to AdWeek, “As part of the campaign, the brand has released this online spot from BBDO New York, starring a loopy goofball of a hotline operator who takes calls and dispatches bike messengers to deliver the insulting candy to those in need”. They also drove social media buzz through a humorous YouTube video in which a call center employee responds to hunger emergency calls that have come in at 1-844-HUNGER-BAR. Here’s the video and audio of what you hear when you call into that number: http://bit.ly/1rflHhQ

"We believe the new bars will inspire people to not only quickly identify their own symptoms and satisfy their hunger, but give them a new, fun way to call-out friends and family on who they become when they're hungry, too," says Snickers brand director Allison Miazga-Bedrick.

The campaign started in 2010 with a blockbuster the Super Bowl spot with Betty White and Abe Vigoda http://bit.ly/1IcppxT. With the success they had in 2010, they’ve continued the campaign ever since with celebrities Aretha Franklin and Liza Minelli. In 2015, they had a Partridge family parody with Danny Trejo as Marcia and Steve Buscemi as Jan http://bit.ly/1vPS1cd and more recently in 2016 they shared a new spot the parody of Marilyn Monroe who is depicted by Willem Dafoe http://bit.ly/1o6cJBw.

I believe this advertising is brilliant for a number of reasons. First, it is based on a strategic insight that people are grouchy when they’re hungry and that Snickers can satiate their hunger and change their mood. Also the spots are creative, fun to watch, and nostalgic for everyone. Finally, the rotating cast of celebrities for the ongoing campaign drives buzz and excitement about upcoming spots. These are all the ingredients necessary for great advertising.

However, the biggest idea for me comes from realizing that an external advertising positioning campaign is also being used to change the product packaging, and most likely the culture of the organization itself. Instead of being a traditional candy bar company, Snickers is transforming their customer engagement model to satiate both the physical need of hunger AND the emotional need to improve their mood. Taking it one step further to create and display 21 customized bars that you can give to friends and relatives is quite innovative.