Will the acquisition of Whole Foods by Amazon going to work?... It won’t be easy. 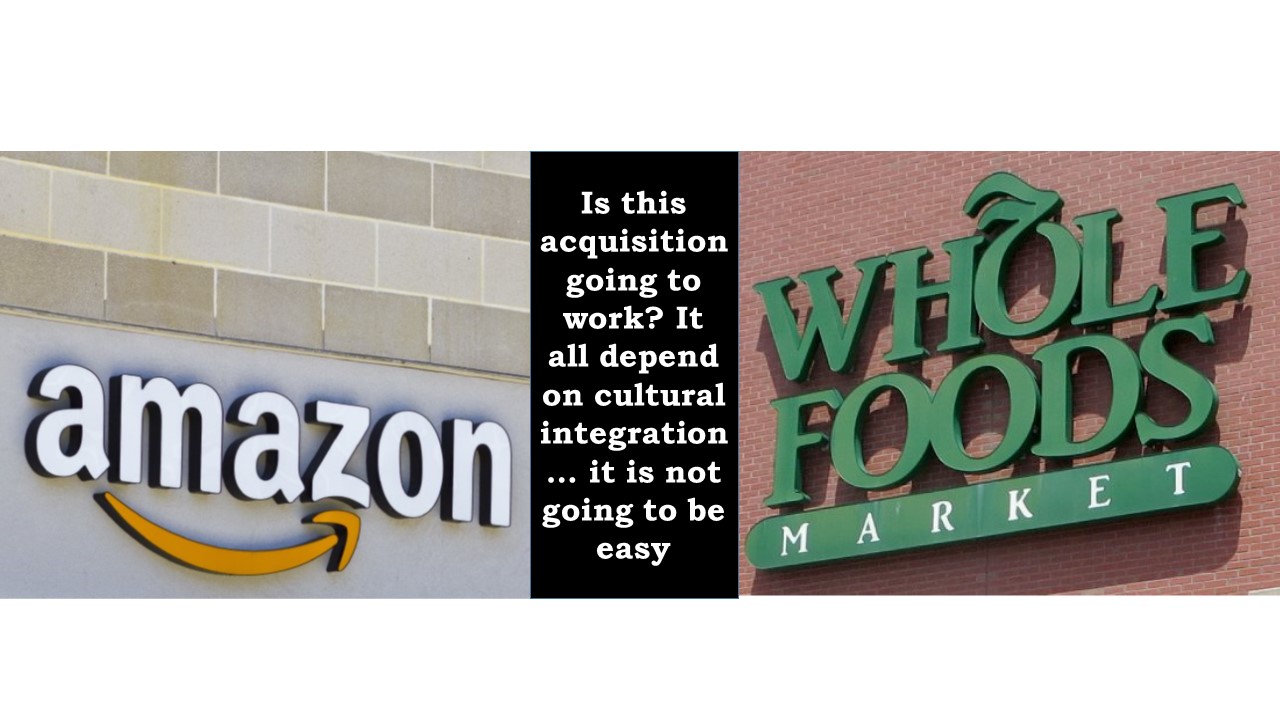 Will the acquisition of Whole Foods by Amazon work?... It won’t be easy.

When I heard the news last week that Amazon was going to acquire Whole Foods for 13.7 billion dollars, my first reaction was excitement and happiness. Why? Because I am a big fan and customer of both organizations. Both companies believe in exceptional customer service, which is delivered through their people and operational processes

This move has the potential to change home delivery and how consumers buy groceries forever. But it isn’t going to be easy. Even John Mackey, Whole Food’s CEO said, in an all hands Whole Foods employee meeting that merging the culture was likely to change. Mr. Mackey said, “the acquisition is going to change our culture. I mean, it’s the truth. It’s inevitable. But it doesn’t necessarily mean it’s a bad thing... But I do want to communicate… I am, like super excited.”

Mergers and acquisitions of this magnitude, who are enabled by disruptive technology will experience a need for changing values and behavior of both companies.

To shed some light on this topic, Inward conducted some secondary research that represents best practice for mergers and acquisition of this size.

In 2015, there were nine deals valued at $50 billion or more. For example, Anheuser-Busch InBev agreed to purchase brewer SABMiller for $105 billion, and Pfizer Inc. agreed to buy Ireland-based Allergan for $160 billion to create the world’s largest pharmaceutical maker. Walgreens acquired Boots Alliance and then Rite-Aid., In the media world, Charter and Time Warner also merged.

We’ve observed that there have been many mergers and acquisitions in 2016 as well. For instance Shire has acquired Baxatla, and Dow Chemicals and DuPont. The list goes on and on, and the trend for mergers and acquisitions will only increase in our future. The questions becomes, will they be successful and what can companies do to ensure a smooth transition, and smooth acculturation?

According to a recent 2016 M&A report by KPMG, last year was the biggest ever for U.S. mergers and acquisitions. By year end $4.7 trillion of global deals were signed, topping 2007’s previous record for deal value. U.S. executives expect another banner year for deal activity in 2017, according to a survey of over 550 M&A professionals conducted by KPMG, in partnership with FORTUNE Knowledge Group

These executives expect the number of M&A deals to accelerate and the average deal size to increase in 2017. Findings from the survey— KPMG’s 10th annual study of the M&A outlook—suggest that M&A remains the preferred growth strategy. What are the main factors driving dealmakers? And what explains the seeming resilience of M&A in the face of global political anxiety, sluggish growth across emerging markets, and uncertainty surrounding interest rates? This report seeks to provide answers to these questions at a critical moment in the global economic cycle. Mega deals appear to be on the rise.

M&A is a notoriously difficult undertaking.

According to KPMG survey respondents, the most important factor for the success of a deal is a well-executed integration plan (39 percent). Other key elements include the correct valuation (31 percent), an effective due diligence plan (18 percent), and the general economic environment (11 percent).

Early planning is key to developing a well-designed integration plan. During the first 100 days, management needs to develop a methodology for understanding exactly where and how the acquired company makes money. The management team must be able to track and prioritize the key profit drivers in the organization as soon as possible. In our opinion, culture must also be addressed prior to the close and within the first 100 days.

What is the role of cultural integration?

An old friend of mine and management guru, the late Dr. Michael Hammer, the author of “Reengineering the Corporation”, frequently reminded me that most major process redesign, reengineering and mergers and acquisitions fail because of poor integration, lack of communications and incongruent cultural fit. After conducting our own research of recent mergers and acquisitions, we have anecdotal proof that there are successful traits a company can adopt during the integration process to ensure acculturation and move forward successfully. Without a clear sense of unity, direction, vision, mission and culture companies will be more likely to fail.

After studying several recent mergers and acquisitions case histories in-depth, we have identified seven steps that should be included into the integration plan by marketing, communications and HR professionals. These seven steps should be process driven and rigorous in the same way the financials are reviewed by the bankers. They include the following:

1. Leadership structure - the structure of the new organization must be clearly defined and presented in a clear and cogent fashion. This should include functional heads from each department of both companies. This step should identify a clear integration timeline,  and demonstrate unity and agreements on all key topics and issues.

2. Cultural differences, diagnosis and prescriptions - conduct research to determine differences within each corporation regarding cultural strengths and weaknesses of their respective companies. Enable visualization techniques such as word clouds to enable common ground regarding cultural integration. Build consensus through social media such as SharePoint, Yammer and help overcome disparity and arrive at agreements.

3. Establish a communications council - bring together key functional leaders to navigate the communication requirements, frequency and talking points that need to be conveyed to the organization. These talking points should be transparent and honest regarding consolidations and possible layoffs, timetables and expectations for the future. This group should utilize experienced and professional communications/change management professionals who understand message architecture and who can explain why it is important for the company, why it is important for the individuals (WIIFM), and what new attitude/behaviors are necessary for successful merger to take place.

4. Define the new culture - using collaborative software and social media, isolate the key cultural elements desired in the new merged company. Try not to hold onto old values of each respective company, but rather unify all constituencies around something new, fresh and exciting for the future. Rewrite and socialize the new cultural manifesto and statements and celebrate how it came together and how it will contribute to future success. Don’t only articulate values alone and put them up on posters. Simultaneously identify action/behaviors associated with each of value so that your employees understand that changing their behaviors are required and that they will be held accountable for this change.

5. Vision, mission and values - elaborate on the new culture by defining the mission, long-term vision and collective values of the new company. Be as inclusive as possible, seek out opinions, provide regular feedback and report progress at all levels so that it gets cascaded down into the organization and into the field.

7. Measurement and benchmarking - to demonstrate success and report on progress, it is important to conduct benchmark research to assess the understanding and progress over time. In addition, consider ongoing measurements rather than singular moments in time on a calendar. Survey constituencies every month with five short questions and report the findings fast through regular communications at all levels within the organization.

Cultural transformation in a mergers and acquisition environment is not easy. It should not be taken for granted. It must become a business process that is rigorous, structured and accountable. Companies that are not successful at cultural integration fail in the short term or long term. It is hard work and companies should seek out guidance from professionals just like they seek out guidance for the financial/banking transactions and legal ramifications from attorneys and law firms.

If your company is considering a merger or acquisition or the desire to integrate cultures, please give us a call to discuss. Be sure to ask us for our merger and acquisition case histories and best practices presentation. It reviews the lessons learned, positives and negatives of several recent mergers and acquisitions and the pitfalls to avoid.