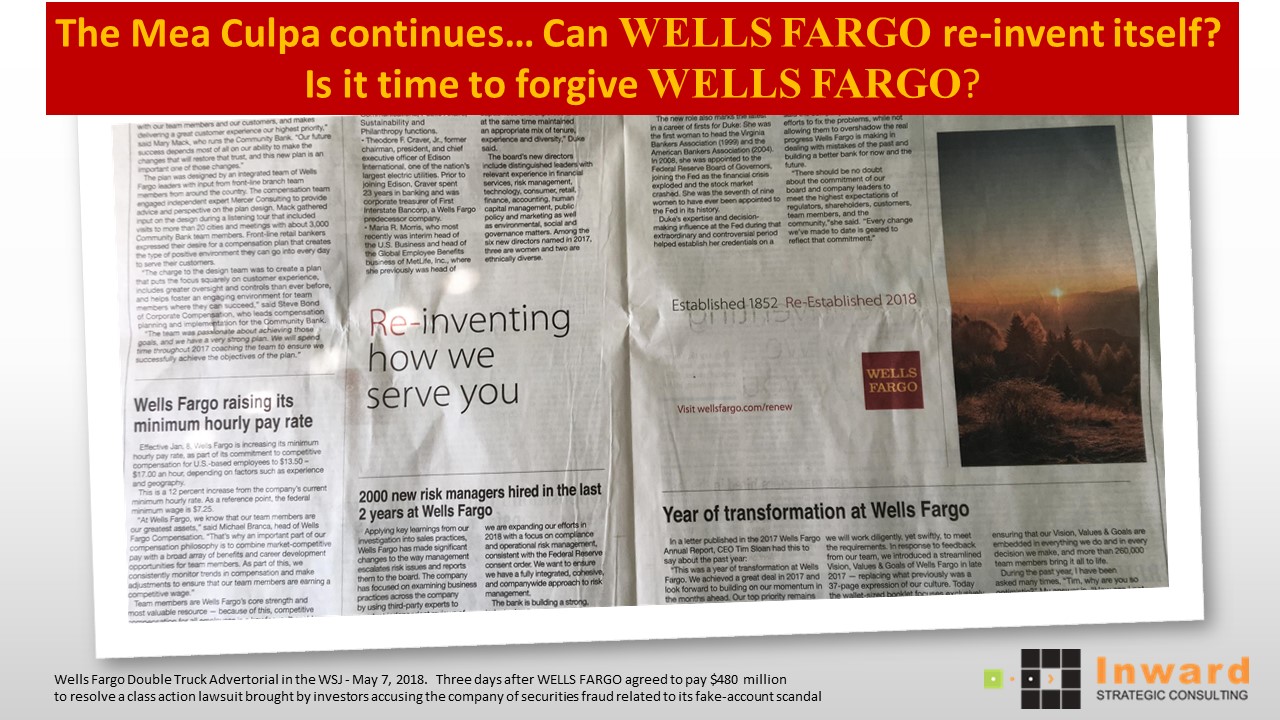 Should the world forgive Wells Fargo?

In 2014, Wells Fargo’s clients noticed something was wrong in their accounts after being charged unanticipated or unauthorized fees. After consumer complaints to regulators an investigation revealed branch managers and workers were just adding accounts and fees without telling the customers, expecting them never to notice. Furthermore, managers were pressured to achieve high sales goals and incentivized with selling multiple "solutions" or financial products. This blame was later shifted to a top-down pressure from higher-level management to open as many accounts as possible through cross-selling.

The LA Times reported that “Wells Fargo CEO knew for years about problems with unauthorized accounts but chose to do nothing about it”. Finally, in April 2017, Wells Fargo agreed to the first of several customer settlements of $142 million because of the bogus accounts. Here is a video from their CEO and their affirmation to address their deeds and move forward. http://bit.ly/2tiSzHG. They followed up with a consumer ad campaign that was direct and to the point. They acknowledged blame and shared what they were doing to correct the situation and ensure it doesn’t happen again. http://bit.ly/2fez8Ib. Subsequently, for a while, we all thought their problems were over.

Now this, a new blow to customer confidence. Last Friday the embattled bank agreed to pay $480 million to resolve a class action lawsuit brought by investors accusing the company of securities fraud related to its fake-account scandal. “We are pleased to reach this agreement in principle and believe that moving to put this case behind us is in the best interest of our team members, customers, investors and, other stakeholders,” Wells Fargo CEO Tim Sloan said in the release.

In 2016 there was evidence that the scandal has inflicted serious damage on the Wells Fargo brand. Negative perceptions of Wells Fargo have soared to 52% from 15% before the scandal, according to a survey of 1,500 bank customers conducted in by management consultancy firm cg42. Positive perceptions fell to 24% post-scandal from 60% beforehand.

More concerning, just over half of non-Wells Fargo customers surveyed say they are unlikely to join the bank, compared with 22% previously. The report goes on to suggest that the bank has stunted its ability to attract new customers and more unfortunately, “are likely to lose thousands of current customers”. "The short and medium-term outlook for Wells Fargo is gloomy," cg42 wrote, "The fallout from the scandal will impact the bank's bottom line for years."

The mea culpa continues. How many times can a company say they’re sorry without customers losing confidence in the brand?

On Monday, just three days after the announced the $480 million settlement, while reading my Wall Street Journal, I came across a double truck paid advertisement for Wells Fargo. The ad says, “Re-inventing how we serve you” with a sub headline, Established 1852 - Re-Established 2018. It is an advertorial that cites seven concrete things it is doing to “reinvent itself”. It claims it has realigned compensation to eliminate sales goals, raising minimum hourly wages, named six new board members in 2017 and now has eight independent board members, has hired 2000 risk managers in the last two years, has appointed Betsy Duke as its first female chairman of the board and lastly, has realigned their structure to focus on customer experience “change for the better”.

The advertorial wraps up by talking about 2018 being a year of transformation and references a letter that was written by CEO, Tim Sloan in their annual report which reviews their accomplishments in 2017 and building on their momentum for change. They claim their priorities remain “building the trust of our customers, team members, communities, regulators and shareholders”. They claim they have made foundational changes to “identify and fix problems so that they do not happen again and have made significant progress and commitment to make things right for their customers and build a better bank”

Lastly, there is a URL wellsfargo.com/renew, which by the way, doesn’t work. I tried it several times and it directs me to a credit card application. Just lame, if you ask me. You try it and see what happens.

Haven’t we heard this all before? Admission of guilt – Promises to change - I can only imagine what it’s like to work at Wells Fargo these days. There must be a lot of finger-pointing, chaos, urgency, blame, anger and depression, resentment, and defection of talent going on there.

Initially, my thought was to dissect the advertorial apart with a red edit and repost it on this blog as an example of what they were doing wrong. I spent the day thinking about it. The more I thought about it, the more it seemed genuine. I felt bad knocking them when they were trying to reverse a bad situation.

My thoughts shifted from accusation and blame to what should they be doing. How can they win over the public and employees and come across as sincere, trustworthy and reliable again?

As an internal and external brand consultancy, here are some of our suggestions. First, they should seriously consider a total disruptive brand repositioning. Create a new bank – not a reinvented one. It that should start with a new brand name. Yes. Drop the Wells Fargo name - all they have left of their past brand equity is the stagecoach and the team of horses. Why maintain a name and hold onto something that no one believes in?

What is disruptive brand positioning? It is when a company rethinks its core business model and strategy that broadens the customer and employee engagement beyond its traditional consumer marketplace. It radically changes the appeal, relevance and the attitudes of a new changing customer base. Examples: the classic example is when IBM evolved from being a traditional mainframe computing company to and e-business company. Overnight it disruptively repositioned itself and broaden its footprint appeal to senior executives to provide strategy creation, open markets and provide advisory and consulting services beyond hardware and software solutions alone. Today, IBM continues to evolve from E-business to “cognitive computing” with their introduction of Watson last year. The advertising is brilliant, the strategy is brilliant and their businesses benefiting.

Once Wells Fargo has clarity and has disruptively strategy for a new way of banking, it needs a comprehensive internal and external brand communications program using new channels, nontraditional media and experiential marketing techniques. Tactics and media should match the disruptive repositioning of the new brand. Internally they need to overhaul their culture, purpose and values through an effective on-going internal change communications program.

Here are some ideas that they should considered to transform their organization to become customer-centric.

•             Authentic and Sincere - Avoid platitudes and posturing, be personal and human

At this point, all we can do is wait and see how Wells Fargo leadership grasps the need to disruptively reposition their company. Divorce itself from the past and establish (not reinvent) a new future.

If you would like to have a conversation on how you can attain a disruptive repositioning strategy please give me a call.