A Culture Of Healthy Debate 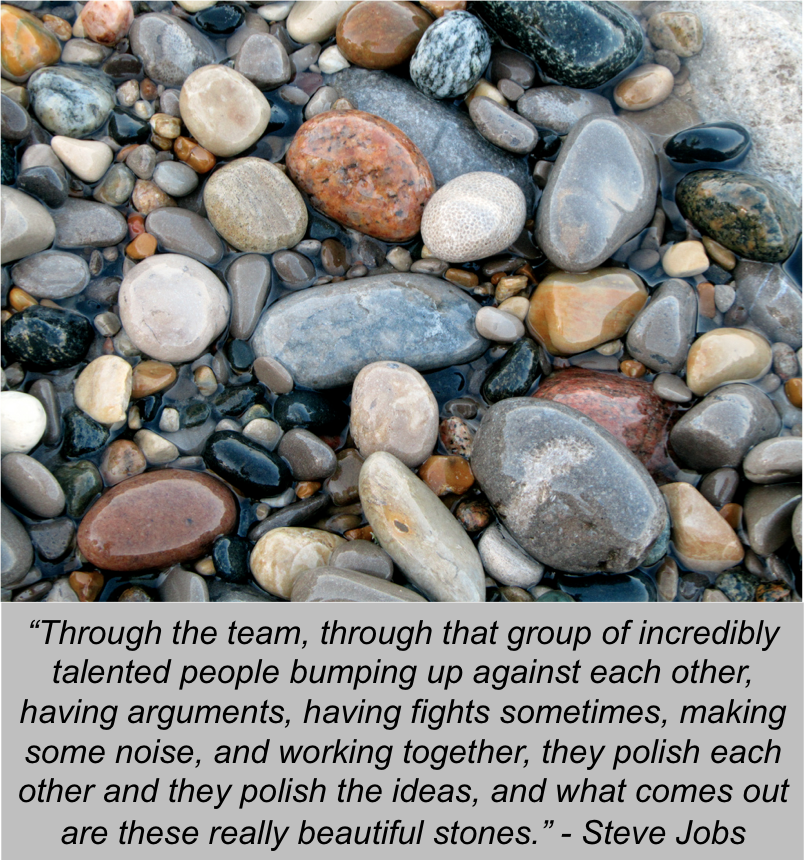 Our team recently read an intriguing article about how Steve Jobs promoted debate within the Apple culture. His insightful analogy for workplace debate is included below, but you can read the entire piece here: http://nbcnews.to/2nEVbzt

“Steve Jobs once told the story of going over to a neighbor's house as a kid. The neighbor asked him to collect rocks in the yard. Steve collected a few and handed them over to the neighbor, who threw them into a tin can with some liquid and sandy grit, shut the lid, and turned on a motor which rotated the can. Over a terrible racket, the neighbor asked Steve to come back the next day. When he returned, the neighbor turned off the rock tumbler and pulled out the stones. Steve was astounded to see how beautiful they had become, polished and shiny. Years later, he likened debate on a team to that rock tumbler. There's a lot of noise, a lot of friction, but out of that process, sometimes painful, come these beautiful polished stones. Both the work and the people who do the work get polished.”

Inward Strategic Consulting is fond of using analogies for complex business ideas, and this example is no exception. It suggests that debate can often create friction between team members; but if you approach the process in the right way, the end result will be better than the original idea, and the debating employees will have learned new perspectives as a result. This is a powerful concept, because this system encourages healthy debate to become a key aspect for improving the product/service, while enhancing the knowledge and skill set of the employees involved. This is a win-win for both the product/service, and for improving employee engagement.

However, a culture of healthy debate requires a few guidelines and baseline expectations for it to remain “healthy” debate. Without these guidelines, unhinged debate can easily descend from productive to rancorous. On the other end of the spectrum, environments that discourage all forms of debate can suffer from this rigid restriction. Employees would avoid speaking their mind and voicing a concern for fear of reprimand from a higher up. This would then lead to lower quality products/services, fewer learning opportunities for employees, and a culture of fear that would be especially unappealing to the inherently collaborative millennial workforce.

To encourage healthy and productive debate, we recommend the following strategies:

Our firm has always prided ourselves on our culture of “Abundant Mentality”. This is an idea espoused by Peter Senge, an MIT professor, and author of the book, The Fifth Discipline. Dr. Senge promoted the idea that collective abundant thinking and productive conversations yield better ideas and innovations, while encouraging acceptance and buy-in. Basically, if you have a great idea and you couple it with another great idea from a colleague, together you can create an even better idea than your original thought. Within our culture, this concept is fundamental to who we are and how we interact with each other and with our clients day in and day out. The benefits are great with a business environment that is positive, encouraging and more fun. Does your team have any other ideas for promoting a culture of healthy debate? We’d love to hear from you, shoot us an email at asteinmetz@inwardconsulting.com if you’d like to “continue this debate”.