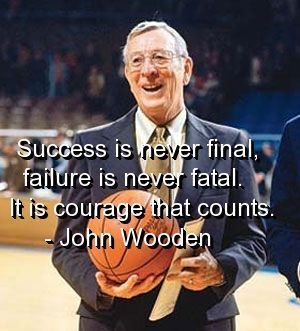 Below are a number of other memorable John Wooden quotes:

"When opportunity comes, it is too late to prepare."

"Adversity is the state in which man most easily becomes acquainted with himself, being especially free of admirers then."

"Be prepared and be honest."

"You can't let praise or criticism get to you. It's a weakness to get caught up in either one."

"You can't live a perfect day without doing something for someone who will never be able to repay you."

"A coach is someone who can give correction without causing resentment."

"If you're not making mistakes, then you're not doing anything. I'm positive that a doer makes mistakes."

"Ability is a poor man's wealth."

"Failure is not fatal, but failure to change might be."

"It's not so important who starts the game but who finishes it."

"It's what you learn after you know it all that counts."

"It's the little details that are vital. Little things make big things happen."

"Talent is God given. Be humble. Fame is man-given. Be grateful. Conceit is self-given. Be careful."

"Success comes from knowing that you did your best to become the best that you are capable of becoming."

"Success is never final, failure is never fatal. It's courage that counts."

Thank you John Wooden for your wisdom, creativity and leadership.